Explore solutions for pharmacies and laboratories.

Monitoring the Temperature of Complex Systems… and Sandwiches

In a simple cooler or freezer, a single sensor will suffice. Air comes off the cooling unit, is pushed through an in-take vent into the body of the cooler/freezer, and then pulled out of the compartment through an out-take vent. As long as the cool air is flowing through the unit, the sensor will accurately convey the temperature for that unit.

Larger or more complicated units, such as walk-ins and open-air coolers commonly found in grocery and convenience stores, tend to have two out-take vents. This complexity requires an extra level of insight into the systems we monitor. Put simply, instead of one stream of air to monitor we have two. In this description, we might use a single sensor to characterize the temperature of the unit, in a two out-take system, we recommend three.

The following graph is an example of a day in the life of an open-air sandwich cooler at a convenience store. The black line is a sensor near the in-take vent. It may seem colder than expected for a cooler, but remember, this air has yet to be circulated through the unit. The spikes that occur every four hours are a defrost cycle to keep frost from building up in the unit. The orange and blue lines are the left and right out-take vents, respectively. They sit at a temperature roughly 12° F warmer than the in-take sensor and show the same defrost cycle, albeit with a warmer starting point. 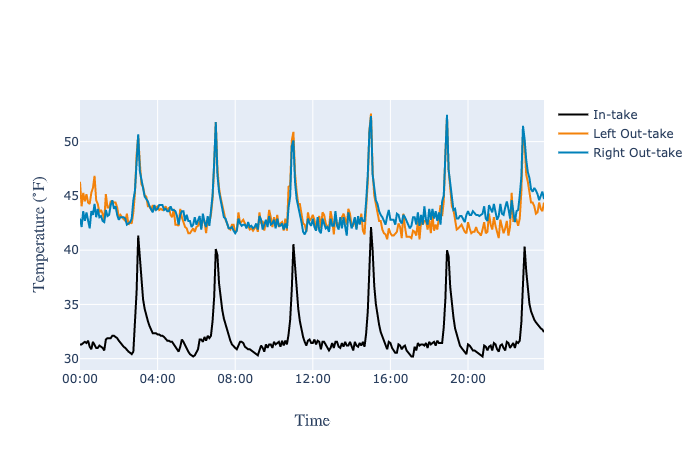 A day in the life of an open-air sandwich cooler at a convenience store.

From this figure, we can see that the cool air warms up by about 12° F as it circulates, leaving the out-take sensors reading temperatures significantly higher than the in-take. We can also see that there is little difference between the right and left out-takes. The distribution of cool air throughout the unit is consistent between the two streams.

A day in the life of an open-air sandwich cooler at a convenience store during a different time of year.

The left out-take sensor is still installed in the unit - the temperature is still well below ambient (68° F) and defrost cycles are still apparent, although less pronounced. This shows that some air from the cooler is still getting into the left out-take, but not as much as expected. Instead of an uninstalled sensor, the 7 degree difference between out-takes could be indicative of several issues.

One potential issue is that the out-take vent is being blocked by the contents of the cooler. If the vent cannot pull air from the cool interior of the unit, the sensor will only measure the temperature of the air that is in the internal workings of the refrigerator. This can be easily fixed by moving whatever is blocking the vent. Future occurrences can be prevented by training employees who stock and monitor the cooler to not place anything next to the vents.

Another potential issue is that the out-take fan could be broken. This would cause less mixing of cold air on that side of the cooler and could result in product loss. Once blockages are eliminated as a cause, the store manager should move affected product out of the cooler and call for a repair. Since the compressor and the right-outtake fan would have to work extra to maintain temperature, this malfunction could cause the entire cooler to break and should be resolved as soon as possible. 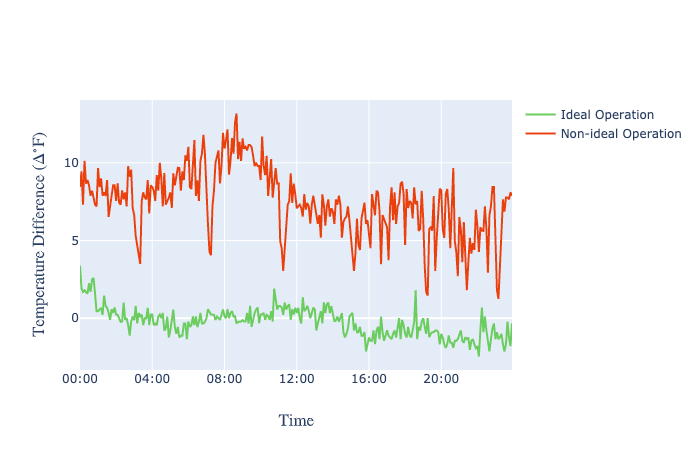 The temperature differences between the two time periods, as outlined earlier in this post.

We have looked at a good day and a bad day in this sandwich cooler’s year, but what about the whole year? Which day is more indicative of the functionality of the cooler? Should this unit be replaced or repaired - or did it have just a few bad days?

The following graph shows the daily average of the difference between the left and right out-takes over the course of the year (orange line). The blue shaded area is a recommended range of temperature difference (+/- 2.5° F). There are 58 individual days where this range is exceeded. These group into 25 “excursions”, where if the temperature difference is greater than 2.5° F for multiple consecutive days it counts as a single excursion. There are 13 identified excursions lasting more than one day. 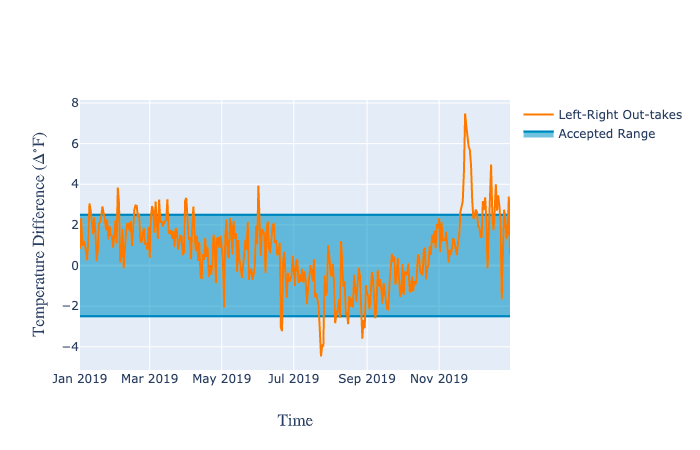 The daily average of the difference between the left and right out-takes over the course of the year.

Overall, this unit was within acceptable parameters 84% of days in the year. This is not ideal, but could very well be explained by usage patterns – no store is able to monitor the location of its contents 100% of the time. However, once we look at the timing of the excursions, we see that 45% of the days that were out of the acceptable range occurred in the last two months of the year. This is worth investigating further to potentially repair the cooler.

In conclusion, the more complex a cooling system is, the greater the potential for more actionable insights using temperature monitoring.

Topics: Food Safety
How Industry and Congress Plan to Fix Food Expiration Labels Built to Travel: The Remarkable Capability of Road Trains
Other Suggested Posts
Restaurants Need a Digital “Booster”
The coronavirus pandemic has accelerated the digital transformation of the food service industry faster than anyone had ever predicted. Adoption of IoT ...
Read More
New OSHA Heat Standards Require Indoor Temperature and Humidity Monitoring
While the nation transitions into months of cooler weather we only need to look back to the previous summer to acknowledge that our world continues to get much ...
Read More
The Post-Pandemic Market: Digital Transformation at the Tipping Point
The COVID-19 crisis has radically altered the largest global retail category, food and beverage, and the post-pandemic market may very well prove to be the ...
Read More
The Post-Pandemic Market: A Commitment to Sustainability
This post is the second in our series about how grocers are dealing with the legacy of COVID-19 in a post-pandemic market. In this post, we look at the issue ...
Read More
The Post-Pandemic Market: How Retail Grocery is Adapting
This post is the first in a series of three that look at how the grocery sector is dealing with the legacy of COVID-19 in a post-pandemic market. In this first ...
Read More