1 (b) “Dry place” means a place that does not exceed 40 percent average relative humidity at 68 degree Fahrenheit or the equivalent water vapor pressure at other temperatures.”

At first glance, this is a little complicated. While most are familiar with the discomfort that accompanies a hot and humid summer day, for example, many people don’t know what the water vapor pressure is at any temperature—or how it can vary with temperature. 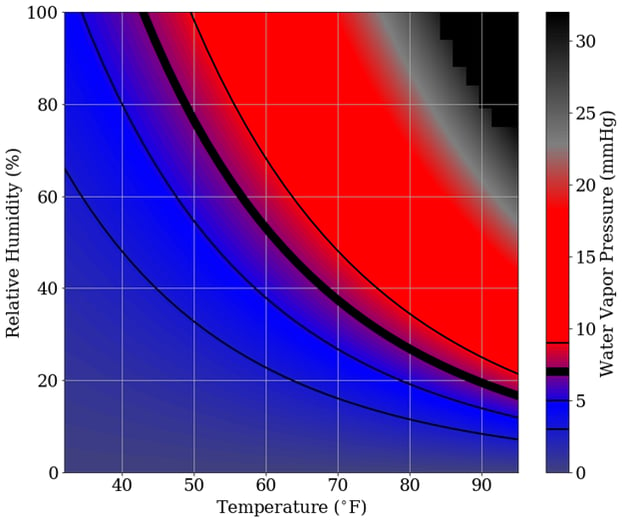 From this figure, we can see that below certain temperatures, the water vapor pressure will never exceed the definition of “dry” in the statute. The temperature/humidity combination at which the thick black line hits 100 percent humidity is not at risk of degrading pharmaceuticals, despite the air holding the maximum amount of water possible at that temperature. While this allows dryness to be ignored in coolers (“cold and dry” places), “cool and dry” generally refers to pharmaceuticals stored at room temperature in warehouses and retail locations. We can probably all agree that 40℉ is not a comfortable temperature for a room!

On this particular week, no store we monitored in Wisconsin was in compliance less than 96.9 percent of the time. While this is a very good statistic, November in Wisconsin is not known for its high levels of humidity. This could be a very different picture in the summer. One could also argue that the phrase “average relative humidity… or equivalent water vapor pressure” indicates that the average water vapor pressure must remain below the threshold, which all of the stores did.

Similar to temperature, not every excursion will matter by itself. We should instead consider a cumulative effect, where pharmaceuticals kept in stores that are consistently out of range—or that experience large excursions—are in more danger of going bad.

Interested in learning more? Subscribe to our blog to get the latest posts about remote monitoring and pharmaceutical compliance.

Topics: Pharmacy Safety
4 Lessons to Learn from the IVF Disaster at University Hospital Designing and Deploying Your Temperature Monitoring Solution
Other Suggested Posts
How a Deep Dive into Alerts allows Tailoring of Response Workflows
In a previous post, Jason Sroka, our Chief Analytics Officer, discussed the importance of data when making accurate business decisions based on objective ...
Read More
Protecting the COVID-19 Vaccine Supply Nationwide
As the U.S. enters the second year of the COVID-19 pandemic, the great news is that vaccination programs are now in Phase 2 in most states across the country. ...
Read More
The Art of How: CX Makes the Difference When Choosing an IoT Partner
Signing a contract with an IoT company that monitors critical environments is a big moment for any enterprise. After all, they’re staking their brand ...
Read More
Information vs. Intuition: Start today to build a ‘Data-Driven’ team
You may have seen the term “data-driven” popping up more frequently in the business trade headlines and wondered if it’s just another jargon buzz word. Is the ...
Read More
Harnessing Automation to Mitigate the COVID-19 impact
COVID-19 has been devastating, and it appears to be far from over. As a pandemic, it’s likely one of the most adverse events of our lifetime. Around the globe, ...
Read More