October is American Pharmacists Month! In honor of all those who provide life-saving therapeutics to ensure the public health, we’re posting a 3-part series profiling heroes who made history with their enormous contributions to the pharmaceutical industry. We begin with Henry Banting, a Canadian medical scientist, physician, and Nobel laureate who developed the extraction of insulin into a practical treatment for diabetes, marking one of the biggest medical discoveries of the 20th century.

The Problem of the Pancreas

Sir Frederick Banting (November 14, 1891 – February 21, 1941) received his M.D. from the University of Toronto in 1921. Once he began practicing medicine, he became fascinated about diabetes. While preparing for a lecture on the pancreas, he thoroughly reviewed all previous scientific studies of the gland. His curiosity was piqued by the work of Edward Sharpey-Schafer.

Schafer had already indicated a belief that diabetes was caused by lack of a protein hormone secreted by the pancreas, which he named “insulin.” His theorized that, since insulin controls the metabolism of sugar, its absence would result in the accumulation of excess glucose in the blood and its excretion in the urine. Schafer’s attempts to supply missing insulin by feeding patients fresh cow pancreas had failed, presumably because the proteins in insulin are destroyed during the process of digestion.

The problem, therefore, was how to extract insulin from the pancreas and administer it in a different way than ingestion. Here’s where Banting comes in. Determined to investigate this possibility, he proposed a research plan to J.J.R. Macleod, Professor of Physiology at the University of Toronto. Macleod was initially skeptical, since Banting had no background in research. But he agreed to provide lab facilities for Banting to conduct experiments and test out his ideas.

Banting appointed Charles Best, one of his medical students, as his assistant. Together, in the summer of 1921, they successfully isolated an extract from the pancreas of a dog. By tying off the pancreatic ducts, they inactivated all pancreatic activity while preserving cells known as the “islets of Langerhans.” Since Banting believed these islets were the site of insulin production, he temporarily named the extract “isletin.”

Subsequently, they injected the extracted insulin into a diabetic dog named Marjorie, and recorded the changes. After an hour, Marjorie was able to raise her head, stand, and even wag her tail. Testing a blood sample in the lab, the dog’s blood sugar levels had dramatically decreased by 40%.

Banting and Best with Marjorie, the test dog. Source: http://dogs-in-history.blogspot.com/2016/11/dogs-help-discover-insulin.html

In the fall of 1921, Banting and Best presented their results to Macleod, who noticed flaws in the experimental design, and suggested that the experiments be repeated with more dogs and better equipment. Hampered by the time-consuming task of tying dog ducts and having to wait several weeks before he could extract insulin, Banting switched to the pancreas of a fetal calf that had not yet developed digestive glands, and found the extract to be just as potent. By December, he had also successfully extracted insulin from an adult cow. Beef and pork, in fact, were the primary commercial sources of insulin until they were replaced by genetically-engineered bacteria in the late 20th century. 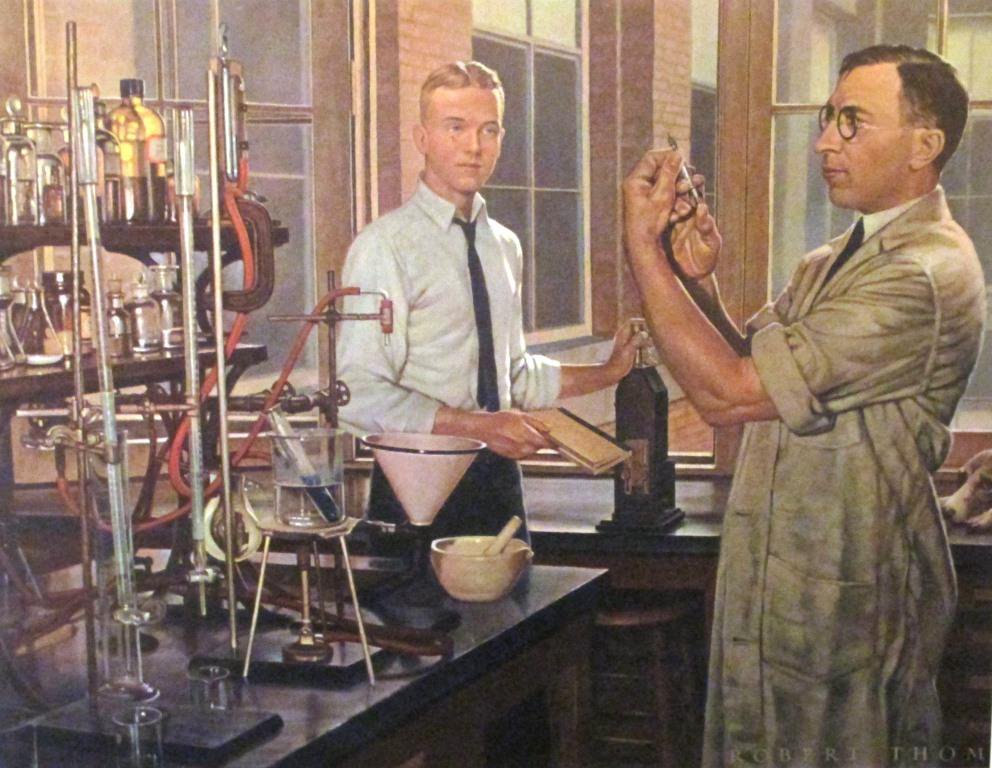 After a second round of successful experiments, Macleod devoted all research in his laboratory to the purification of insulin. He invited a biochemist, James Collip, to join the team to begin clinical testing on a human subject. In January 1922, they administered the first dose to Leonard Thompson, a 14-year-old diabetic who lay dying in Toronto General Hospital. The injection completely eliminated glycosuria (excretion of glucose into urine), a typical symptom of diabetes, without causing any side-effects.

During the spring of 1922, Best improved his extraction techniques so that insulin could be produced on demand, but his preparation contained impurities. The drug firm, Eli Lilly and Company, offered assistance. Lilly's head chemist, George B. Walden, using a process he discovered called “isoelectric precipitation,” was able to produce large quantities of highly refined insulin.

Banting began to treat diabetic patients in a private practice in Toronto and sold his patent rights for insulin to the University of Toronto for $1, claiming that the discovery belonged to the world, not to him. His altruistic commitment to advance medicine allowed insulin to be mass-produced, making it widely available to the public.

In 1923 at age 32, Banting received the Nobel Prize along with Macleod for their work with insulin. Believing that Charles Best was as deserving as Macleod, Banting shared his award money with his younger colleague. To this day, Banting remains the youngest Nobel laureate in the area of Physiology/Medicine.

To get a good idea of just how important the discovery of insulin was, Banting became a celebrity overnight and was revered as a hero worldwide. He even was knighted by King George V of England and featured in comic books for school children.

In response to Banting’s popularity and Nobel prize, the Ontario Legislature awarded the University of Toronto an annual grant to establish the "Banting and Best Research Fund." With this financial support, Banting was hired in 1930 as Canada's first Research Professor and Chair of the newly established Banting and Best Department of Medical Research. For the rest of his career, Banting was committed to scientific discovery and participated in research relating to silicosis, cancer, and aviation medicine among many other projects.

As a refuge from the pressures and fame of his early success, Banting pursued painting. Today, he is regarded as one of Canada’s most important amateur artists, and his work has been displayed at museums.

Banting’s painting of his lab in Toronto. Source: https://www.cbc.ca/news/entertainment/banting-painting-heffel-1.4916322

Banting was also a decorated soldier. During WWI, he served in the Canadian Army Medical Corps and was awarded the Military Cross in 1919 for his “distinguished and meritorious services.” At the outbreak of WWII, Banting volunteered to coordinate the National Wartime Medical Research effort with the National Research Council of Canada, where his team researched treatments for mustard gas, anti-gravity suits, and oxygen masks.

Tragedy struck in 1941 while Banting was traveling to England to consult with his British counterparts about new research. Shortly after his plane took off from Newfoundland, one of its engines failed. While returning to base, the other engine failed as well. The pilot brought the plane down in the darkness and came within a few feet from a safe landing on a frozen lake, but a wing clipped a large tree at the last moment. Banting sustained severe head injuries and a broken left arm. By the time search planes spotted the crash site four days later, he had succumbed to his injuries at age 49.

Now, more than 75 years after his death, Banting’s legacy lives on. His discovery of insulin ultimately enabled millions of people suffering from diabetes to lead normal lives. Although not a cure, this breakthrough would save millions from a disease that was previously considered an early death sentence.

Topics: Pharmacy Safety
Optimizing Store Operations at Scale with SmartSense Young Consumers Put Their Money on Environment-Friendly Restaurants
Other Suggested Posts
Harnessing Automation to Mitigate the COVID-19 impact
COVID-19 has been devastating, and it appears to be far from over. As a pandemic, it’s likely one of the most adverse events of our lifetime. Around the globe, ...
Read More
Shipping Vaccines without a Cold Chain?
A challenge that has faced the immunizations market has been not only the availability of vaccines, but transporting them to middle and lower-income nations. ...
Read More
The Nation’s Pharmacies Answer the Call to Roll Out COVID-19 Testing
In the weeks following the first known cases of COVID-19 infection in the U.S., the federal government, including the Centers for Disease Control and ...
Read More
Carefully Moving the Cold Chain: Best Practices With Managing Refrigerated Cargo
Refrigerated and temperature-controlled cargo is becoming more popular as more commodities require specific climate conditions for transport. More and more ...
Read More
Monitoring Perishables and Medications During a Power Outage
California has experienced unusual weather throughout its 169 year history, but more recently the most populous U.S. state has seen widespread droughts and ...
Read More