If you had to nominate only one federal agency that most effectively protects America’s wellbeing, few would argue with choosing the Centers for Disease Control and Protection (CDC). Whether diseases start in the U.S. or overseas, the CDC’s “24/7 mission” is to fight them with critical science, provide information to citizens, and thereby safeguard communities against dangerous health threats.

The CDC envisions its overall mission as:

We’ve already discussed the central role the CDC plays during food-borne illness outbreaks in a previous post. In this post, we focus on three of the agency’s vaccine programs that have made an enormous difference in preserving public health, especially for children.

Vaccines for Children (VFC) is perhaps the CDC’s most important vaccine program—certainly it’s most successful. From 1989 through 1991, a measles epidemic in the United States resulted in more than 55,000 reported cases, 11,000 hospitalizations, and 123 deaths. Upon investigation, CDC found that more than 50% of the children with measles had not been immunized, even though many had visited a healthcare provider.

In response, Congress passed the Omnibus Budget Reconciliation Act (OBRA) in 1993, which created the Vaccines for Children Program. Launching a year later in 1994, VFC aims to provide no-cost vaccines to children who lack health insurance or who cannot afford the cost. Known as section 1928 of the Social Security Act, VFC is an entitlement program (a right granted by law) for children, age 18 and younger, who meet at least one of the following criteria: Medicaid Eligible, American Indian, Alaska Native, Uninsured, or Underinsured.

Because of VFC, all babies, young children, and adolescents now have a better chance of getting their recommended vaccinations on schedule for 16 diseases recommended by the Advisory Committee on Immunization Practices (ACIP), including flu, measles, mumps, chicken pox, whooping cough, tetanus, diphtheria, and hepatitis. Approximately 85 million doses are administered annually by more than 44,000 doctors at 40,000 locations enrolled in the VFC program nationwide.

The VFC program is federally funded by the Office of Management and Budget (OMB). CDC then uses the allocated funds to buy vaccines at a discount and distributes them to “awardees” (i.e., state health departments and local public health agencies), which in turn distribute them at no charge to private physicians’ offices and public health clinics registered as VFC providers. Integrating both the public and private sectors, VFC represents a major finance reform. Because private providers now play a prominent role in the nation's immunization program, they can provide free immunization services and educational opportunities to patients without a need for referrals.

CDC’s Immunization Information Systems (IIS) are confidential, population-based, computerized databases that record all immunization doses administered by participating providers within a specific geographical region. The CDC’s vision for IIS is to make “real-time, consolidated immunization data and services for all ages available for authorized clinical, administrative, and public health users and consumers, anytime and anywhere.” 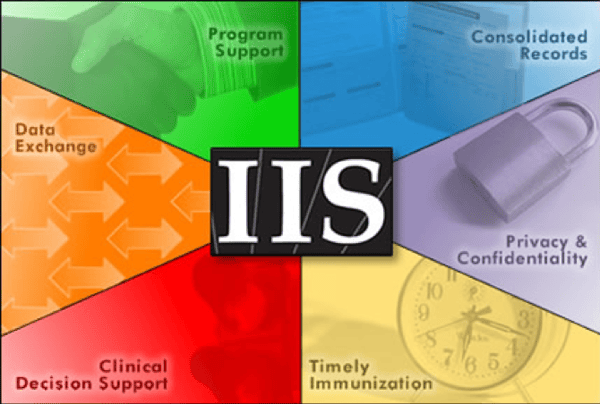 The IIS and its different components to success. Source: https://www.cdc.gov/vaccines/programs/iis/about.html

Why are IIS important? Immunization information systems help providers and families by combining immunization information into one reliable source. For example, by age 2, more than 20% of American children have seen more than one healthcare provider, resulting in dispersed medical records. With advancing age, most people end up with a patchwork medical history that would be difficult to trace manually. IIS is capable of providing a consolidated record of immunizations administered by different providers during their lifespan.

Each year, the CDC National Center for Immunization and Respiratory Diseases (NCIRD) publishes an Immunization Information Systems Annual Report (IISAR) based on the results of a self-administered online questionnaire completed by immunization program managers. The purpose of the IISAR is to assess the performance of awardees in developing, maintaining, and enhancing IIS activities for each calendar year. As an evaluation tool, the IISAR measures progress, identifies areas for improvement, sets program priorities, and supports programmatic, policy, and technical decision-making.

As illustrated in this presentation, CDC IIS operates in complex environments and rely on data streams from multiple immunization providers and health systems.

The previous technological infrastructure was composed of multiple stand-alone systems developed during the 1990s. As the VFC and similar vaccine programs have matured over the last 20 years, the needs associated with managing these programs expanded in terms of scale and complexity. By enabling significant improvements in vaccine order tracking, inventory visibility, fiscal and dosage accountability, and safety response capability at the federal, state, and local levels, the transition to VTrckS represents a crucial enhancement to the nation’s ability to respond to public health crises.

VTrckS offers many benefits for awardees. They can:

CDC into the 21st Century

CDC’s vaccine programs have been highly successful, especially in improving immunization rates for young children. However, significant disparities remain in ensuring access to vaccines across geographic and demographic populations. At the same time, substantial increases in public and private health expenditures can be expected as new vaccines become available. While many of these cost increases will be offset by the benefits associated with CDC vaccine programs, the growing costs of vaccines will be increasingly burdensome to all health sectors.

Given these current challenges, we can expect that the CDC, working with other government agencies and NGOs, will continue to innovate new systems and programs to protect the public health, whatever new and yet unforeseen threats may be looming on the horizon.

Topics: Pharmacy Safety
The Five Biggest Mistakes a Company Can Make in a Food Recall Understanding Robotics Process Automation
Other Suggested Posts
How a Deep Dive into Alerts allows Tailoring of Response Workflows
In a previous post, Jason Sroka, our Chief Analytics Officer, discussed the importance of data when making accurate business decisions based on objective ...
Read More
Protecting the COVID-19 Vaccine Supply Nationwide
As the U.S. enters the second year of the COVID-19 pandemic, the great news is that vaccination programs are now in Phase 2 in most states across the country. ...
Read More
The Art of How: CX Makes the Difference When Choosing an IoT Partner
Signing a contract with an IoT company that monitors critical environments is a big moment for any enterprise. After all, they’re staking their brand ...
Read More
Information vs. Intuition: Start today to build a ‘Data-Driven’ team
You may have seen the term “data-driven” popping up more frequently in the business trade headlines and wondered if it’s just another jargon buzz word. Is the ...
Read More
Harnessing Automation to Mitigate the COVID-19 impact
COVID-19 has been devastating, and it appears to be far from over. As a pandemic, it’s likely one of the most adverse events of our lifetime. Around the globe, ...
Read More