The Impossible Burger: The Future of Meat?

What makes the Impossible Burger impossible? For the first time, a veggie burger can truly market itself as “meaty.” That’s right – it looks, smells, sizzles, and “bleeds” like real ground beef. Although the Impossible Burger is officially vegan, Patrick O. Brown, founder and CEO of Impossible Foods, is marketing the product to omnivores and flexitarians (carnivores who are choosing to eat less meat).

Meat on a Mission

Brown recognizes that many vegetarians and most vegans aren’t typically seeking a simulated meat-eating experience. But by winning over the rest of the population to affordable, nutritious, plant-based burgers, he hopes to completely replace fast-food burgers made from animal flesh by 2035.

A champion of a sustainable food system reducing dependence on industrial livestock farming, Brown views his product as “meat with a mission” to make a better planet. Impossible Burgers reportedly emit 87% fewer greenhouse gases than a beef burger, use 75% less water, and 95% less land to produce. And that’s just the beginning. Brown’s R&D staff is already developing vegan dairy and other types of impossible meats, including poultry, pork, and fish.

Investors and restaurants have responded with enthusiasm. Impossible Foods has raised $400 million from high-profile investors including Bill Gates and Google Ventures. Impossible Burgers are now available at nearly 3,000 restaurant locations, including national chains like White Castle and upscale foodie destinations like Momofuku Nishi in New York. Indeed, a petition to get the Impossible Burger on the menu at McDonald’s has attracted tens of thousands of signatures. With this momentum building, Brown recently opened a plant with the goal of increasing production from 300,000 to 1 million pounds per month.

This is the first question that comes to mind for most people, including consumers, chefs, restaurant managers, food activists, and federal regulators. Brown’s R&D team chose the Impossible Burger’s ingredients after a five-year effort to answer the simple question: why does meat taste like meat? They researched every aspect of the sensory experience of ground beef, and then recreated the precise flavors, aromas, texture, appearance, and even nutrition of ground beef – using plants. Here’s what’s inside: 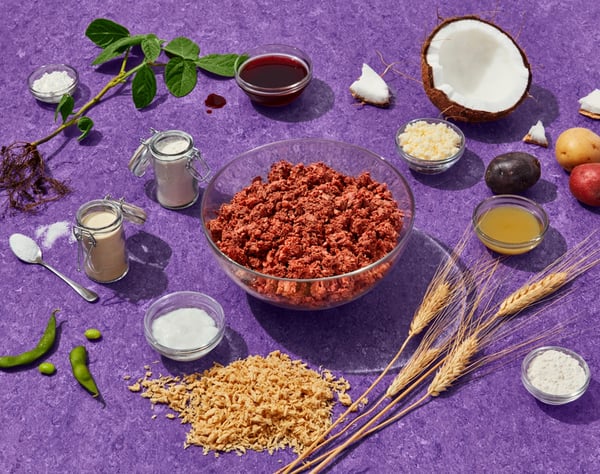 Your next question might be: what the heck is soy leghemoglobin (SLH)? SLH is a heme (or iron) protein found in the roots of soy plants. It’s similar to myoglobin, the heme protein in animal muscles that gives meat its flavor and aroma. Sounds appetizing? Actually, some of America’s most well-known food critics give the Impossible Burger a thumbs-up in terms of taste. Food activists, on the other hand, have been less enthusiastic. In particular, environmentalists (who typically advocate vegan products) object to the Impossible Burger as being potentially unsafe.

Why unsafe? Because the process to create an Impossible Burger uses genetically modified material. Although SLH is found in nature, soy roots contain only tiny amounts. Impossible Foods would need to harvest one acre of soybean plants to produce a kilogram of heme. Instead, Brown figured out a way to make yeast produce SLH in a lab, by tweaking its DNA. This procedure lets his company produce the Impossible Burger at an industrial scale with the lowest environmental impact. Being a GMO product, however, the Impossible Burger cannot be marketed as organic. More significantly, GMO SLH is a new ingredient that’s never before been in the human food supply.

Given this novel situation, in 2015 Brown voluntarily asked the FDA to review the Impossible Burger’s safety – despite his company having no obligation to do so. To his surprise, the agency sent him a letter refusing to declare SLH as safe. The FDA specifically criticized Impossible Foods for not conducting sufficient testing to determine if SLH could be an allergen. Upon the public release of the FDA letter, consumer groups created a controversy. Friends of the Earth, an environmental lobbying group, cited the letter as a demand for Brown to shelve the Impossible Burger until its safety could be established by the FDA.

Given this pressure, Brown send the FDA more than 1,000 pages of new test data. This time around, the agency came back with a letter claiming: “Based on the information that Impossible Foods provided, as well as other information available to FDA, we have no questions at this time regarding Impossible Foods’ conclusion that soy leghemoglobin preparation is Generally Recognized as Safe (GRAS) under its intended conditions of use to optimize flavor in ground beef analogue products intended to be cooked.” Free and clear, Brown needed no further clarification of his claim that SLH would not negatively impact human health. While not really a legal victory, since Brown was always free to market the Impossible Burger, as far as perception is concerned, it was a public relations milestone.

The Vegan Future of Fast Food

The Impossible Burger controversy is timely. More startups than ever before are investing massive resources into the trend for “fake meat.” Alternative proteins are, in fact, expected to grow 17% a year to $863 million in 2021. As more consumers become convinced that plant-based foods are good for their own health and the health of the plant, they will continue to purchase vegan fast-food options. Startups such as by CHLOE and Plant Power Fast Food are paving the way for omnivores who want to try something new. Even McDonald’s is carrying out a small-scale test for vegan burgers in Finland.

Along with consumers, some advocacy groups are also coming around. For example, the Union of Concerned Scientists, generally opposed to GMOs, is optimistic. Said Ricardo Salvador, director of the organization’s food and environment program, If Impossible Foods “is successful with what they’re doing, and people accept it, the environmental load they’ll be removing is such that the benefits would be innumerable.”

Subscribe to our blog to get weekly emailed updates about food service industry quality and safety issues.

Topics: Food Safety
Effective Training to Improve Employee Efficiency in Chain Restaurants Milestones in Pharmaceutical History: Fleming’s Discovery of Penicillin
Other Suggested Posts
New OSHA Heat Standards Require Indoor Temperature and Humidity Monitoring
While the nation transitions into months of cooler weather we only need to look back to the previous summer to acknowledge that our world continues to get much ...
Read More
The Post-Pandemic Market: Digital Transformation at the Tipping Point
The COVID-19 crisis has radically altered the largest global retail category, food and beverage, and the post-pandemic market may very well prove to be the ...
Read More
The Post-Pandemic Market: A Commitment to Sustainability
This post is the second in our series about how grocers are dealing with the legacy of COVID-19 in a post-pandemic market. In this post, we look at the issue ...
Read More
The Post-Pandemic Market: How Retail Grocery is Adapting
This post is the first in a series of three that look at how the grocery sector is dealing with the legacy of COVID-19 in a post-pandemic market. In this first ...
Read More
Post-COVID-19 Food Safety Will Introduce a 'New Era' of Digital Tools
In a previous post, we discussed the importance of each stage of the supply chain doing its part in minimizing food safety risk. The federal government created ...
Read More