Heroes of Food Safety: Louis Pasteur and the Invention of Pasteurization

September is National Food Safety Education Month! In honor of all those who help keep our food safe along the entire supply chain, we’re posting a 3-part series profiling three heroes who made history with their enormous contributions to food safety. We begin with Louis Pasteur, the namesake of pasteurization. He discovered a process that we take for granted today, but saved untold lives since its introduction to food processing more than a century ago.

Proof of the Germ Theory of Contamination

Louis Pasteur (December 27, 1822 – September 28, 1895) was a French biologist, microbiologist and chemist renowned for many contributions to science. Although we usually associate him with pasteurization, it was his discovery of the principles of microbial fermentation that first led him into food safety.

Before he began this crucial work, the scientific community regarded the theory of spontaneous generation as the cause of microbiological infestation – in short, that pathogens could arise naturally from nonliving matter. Pasteur’s research in the 1880s demonstrated that, without contamination, microorganisms could not develop. Experimenting with wine, he showed that thermal processing would inactivate unwanted microorganisms in sterilized and sealed flasks that, when opened, allowed them to grow.

Although germ theory had been hypothesized in the past, Pasteur’s research convinced the European and American scientific communities that it was indeed correct. From this point on, the concept that diseases can be caused by pathological infection shifted to preventing them from entering the human body.

Invention of the Pasteurization Process

Pasteur’s experiments with germs and wine revealed a direct cause-and-effect relationship between bacteria and the souring of wine into vinegar. Subsequently, he invented a process by which bacteria could be killed by heating the wine between 60 and 100° C, then letting it cool. Pasteur completed the first successful test on April 20, 1862, eventually patenting the method we now know as pasteurization, which was soon applied to beer, juice, eggs, and (most famously) milk. This process also proved successful at destroying most yeasts and molds without causing a phase transition in the product. 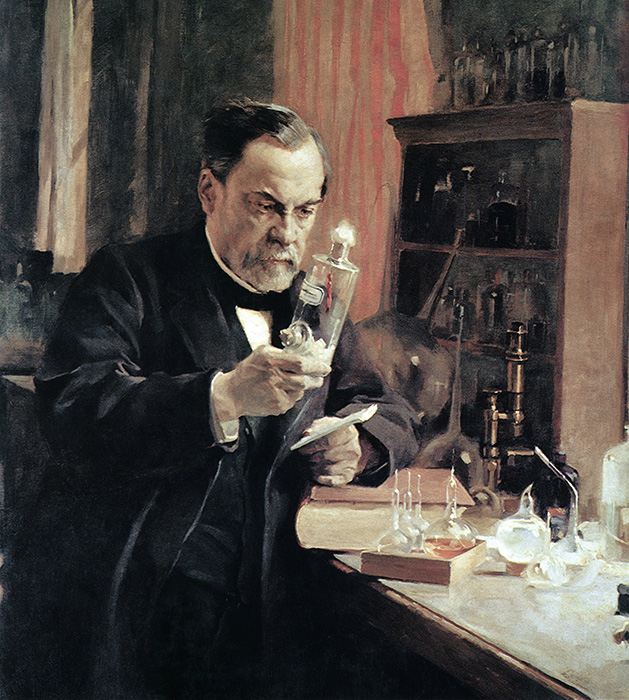 The temperature and time of pasteurization treatments are determined by the food’s acidity. In acidic foods (pH < 4.6) such as fruit juice, in which pathogens are unable to grow, heat is applied to inactivate enzymes and destroy yeast and lactobacillus. In less acidic foods (pH > 4.6), such as milk, the heat treatments are designed to destroy pathogens, as well as yeast and molds. Both processes extend the product’s shelf life, especially in combination with refrigeration.

Food can be pasteurized in two basic ways: either before or after being packaged into containers. When food is packaged in glass, hot water is used to lower the risk of thermal shock. If packaged in plastic or metal, steam can be used, since the risk of thermal shock is low. In general, most foods requiring pasteurization are liquid (such as milk), and can therefore move through a continuous system comprised of a heating zone, hold tube, and cooling zone, from which the liquid is filled into packaging.

Since Pasteur’s discovery of the basic pasteurization process, several traditional methods have been developed:

In addition to these traditional methods of pasteurization, newer processes have been developed to pasteurize foods as a way of extending shelf life without refrigeration, reducing the effects on the sensory characteristics of foods, and preventing degradation of nutrients. A few examples include:

The Controversy Over Pasteurized Milk

While pasteurization has helped provide safe, nutrient-rich milk and cheese for over 120 years, some raw milk enthusiasts claim that pasteurization reduces the nutritional value of milk and that raw milk is a safe, healthier alternative if properly processed in a sterile environment. Currently, both the CDC and the FDA dismiss these claims as lacking scientific evidence and affirm that raw milk remains less safe than pasteurized milk.

In 1910, chemist Ernst Lederle, the NYC Commissioner of Health, introduced mandatory pasteurization of milk in New York City. After incidents of illness and death markedly decreased, individual cities and states began enacting mandatory pasteurization laws. By 1973, with more than 50 years of evidence that the process was saving lives, the federal government required pasteurization of milk used in any interstate commerce. Today, the CDC maintains that improperly handled raw milk is responsible for nearly three times more hospitalizations than any other source of foodborne disease.

The FDA has also published its own webpage that debunks common myths about raw milk and pasteurization:

The Legacy of Louis Pasteur

For his proof of germ theory, discovery of fermentation, and invention of pasteurization, Louis Pasteur was a French national hero by age 55, and even today, his name is a household word across the world. His contributions to food safety and medicine are among history’s greatest achievements, which also includes vaccines for anthrax and rabies. So significant is Pasteur’s legacy, that the UNESCO/Institut Pasteur Medal was created on the centenary of his death, and is awarded every two years "in recognition of outstanding research contributing to a beneficial impact on human health.”

Topics: Food Safety
Managing Cargo in the Age of Less-Than-Truckload What is the Difference Between Logistics and Supply Chain Management?
Other Suggested Posts
The Post-Pandemic Market: Digital Transformation at the Tipping Point
The COVID-19 crisis has radically altered the largest global retail category, food and beverage, and the post-pandemic market may very well prove to be the ...
Read More
The Post-Pandemic Market: A Commitment to Sustainability
This post is the second in our series about how grocers are dealing with the legacy of COVID-19 in a post-pandemic market. In this post, we look at the issue ...
Read More
The Post-Pandemic Market: How Retail Grocery is Adapting
This post is the first in a series of three that look at how the grocery sector is dealing with the legacy of COVID-19 in a post-pandemic market. In this first ...
Read More
Post-COVID-19 Food Safety Will Introduce a 'New Era' of Digital Tools
In a previous post, we discussed the importance of each stage of the supply chain doing its part in minimizing food safety risk. The federal government created ...
Read More
The Art of How: CX Makes the Difference When Choosing an IoT Partner
Signing a contract with an IoT company that monitors critical environments is a big moment for any enterprise. After all, they’re staking their brand ...
Read More