When we think of logistics, we usually visualize cargo in corrugated boxes, or we maybe other materials stowed in shipping containers or transported loosely as break-bulk cargo. However, supply chain management includes anything that needs to get moved from point A to point B. While it usually refers to everyday goods and products, it extends into other areas of shipment, such as automobiles or even houses.

It is now possible to move almost any type of large objects: trains, spaceships, marine ships, airplanes, and more. Indeed, house movers take something that would seem impossible to relocate and do it successfully in a rather short period of time.

There are two primary ways that a structure is moved: disassembly followed by reassembly, or transportation as a whole. When a structure is transported in its whole form, it needs to be raised and then pushed on temporary rails or dollies if the distance is short enough. If not, then wheels such as flatbed trucks might have to be used. These moves are complex and require removal of any objects that might be in the way of transit, as well as any parts of the actual structure itself: a chimney, antennas, or other parts that might interfere with the journey.

Typically, the structure is raised using hydraulic jacks, placed onto the chosen mode of transportation, and then the move begins. However, leading up to the move includes complicated logistics that require necessary permissions to make the move, possible street closures, and notification to those concerned that the move is taking place. Needless to say, the entire move requires a pretty extensive workforce to prepare and monitor the event.

Such moves are also popular in the modular home market. Modular homes can reduce construction time by as much as 35%, enabling people to move-in to their new home faster. This advantage has stimulated the market for moving these modular homes. The structures are usually constructed in a factory-like setting at a location that's distant from the actual site of where the home is to be placed. This is cost advantageous to the buyer, and allows them to see what their home is going to look like by simply visiting the fabrication site where the modular homes are created. 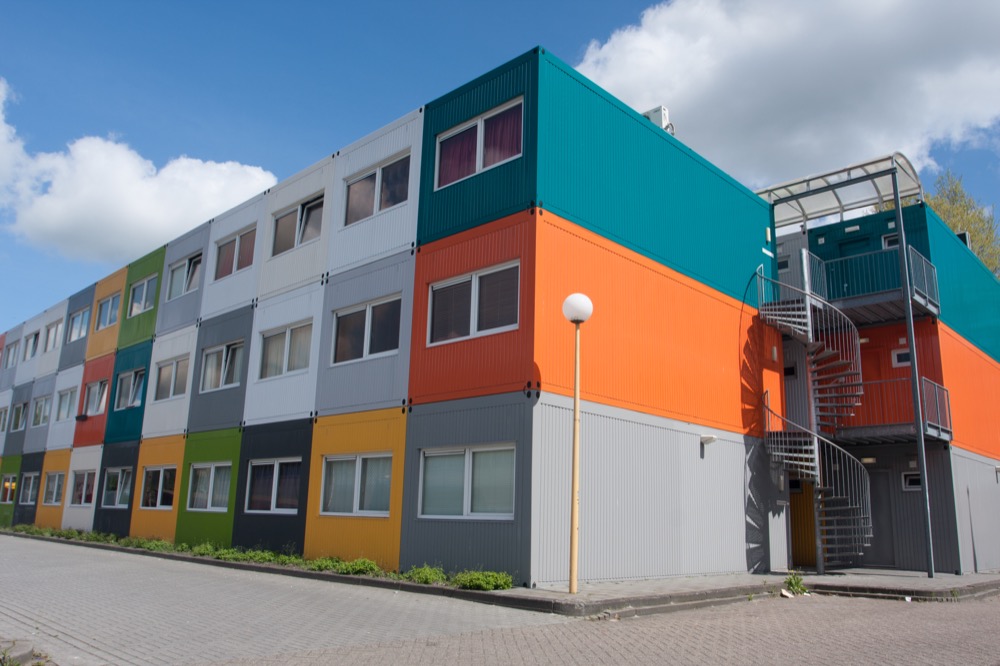 The Curious Case of Sturgis, Michigan

It’s remarkable what house movers can accomplish. For example, Wolfe Housing and Building has successfully completed thousands of moves and lifts of houses and structures. One notable move occurred in Sturgis, Michigan, a town of about 11,000 residents in Southwest Michigan.

The town had a plan to move and revitalize its aging railroad depot. The depot, in need of repairs, was located in a very remote part of town. They wanted to relocate the historic station to the vibrant downtown area where it could be repurposed and restored as a children's museum. It was part of their community planning and brought the historical into the contemporary. After the successful relocation, Sturgis has their restored railroad depot as part of their new downtown setting, located a short distance from where it originally was.

Wolfe also moved a Jewish synagogue in Washington, D.C., in January 2019. They used eleven self-propelled dollies. The building was first moved to a temporary location 50 feet away. Then a new foundation was prepared, dollies were then reinstalled, and the building was moved a mere 1,000 feet. Its newly prepared foundation was bolstered to accept the entire building over an underground parking garage.

If these feats of transportation aren't enough, it's worth looking at what happened in 1999 in North Carolina. The Cape Hatteras Light Station, which consists of about seven historic structures, was successfully relocated about 2,900 feet from a spot on the beach where it had stood since 1870.

The lighthouse had to be removed because of shoreline erosion. Too precious to lose, they safely moved it to a new site where historic buildings were placed in a spatial and elevational relationship to each other, exactly as it had been at the original site. The move was highly publicized, though it had been hotly debated by many who thought that it was impossible to accomplish. After all, nothing of this type had ever really been moved before. The lighthouse still stands today and is a tourist attraction run by the National Park Service.

These cases illustrate the remarkable ability of transportation today. Permanent structures such as homes, buildings, and historic sites can be relocated, thanks to the miracles of modern-day transportation. The credit goes to the ingenuity of shrewd and innovative transportation planners who are able to engineer a move and plan it precisely with utmost detail. It surely demonstrates how important and critical supply chain monitoring and its transportation capabilities are in our modern world.

Topics: Supply Chain
The “Real Food” Movement Is a Real Challenge to the American Diet Innovation in Logistics: Patience, Hype, and Robots
Other Suggested Posts
Carefully Moving the Cold Chain: Best Practices With Managing Refrigerated Cargo
Refrigerated and temperature-controlled cargo is becoming more popular as more commodities require specific climate conditions for transport. More and more ...
Read More
Monitoring Perishables and Medications During a Power Outage
California has experienced unusual weather throughout its 169 year history, but more recently the most populous U.S. state has seen widespread droughts and ...
Read More
The Pharmaceutical Cold Chain: A Lifeline
How do you get insulin to remote countries like Eritrea, Tajikistan, and Pakistan? Or how about delivering life-saving blood-clotting hemophilia treatments to ...
Read More
Field to Market: Grape Logistics
Delano, California is grape country. The northern California town is located about 30 miles from Bakersfield, and is the home of grape growers. It's also the ...
Read More
Built to Travel: The Remarkable Capability of Road Trains
A road train, sometimes called a land train, is a configuration of truck and trailers that is able to carry large loads of cargo across challenging terrains. ...
Read More