Heroes of Food Safety: Upton Sinclair and the Meat Inspection Act of 1906

Continuing our celebration of Food Safety Education Month, in this post we honor Upton Sinclair (September 20, 1878 – November 25, 1968), the Pulitzer-prize winning author of more than 100 books. The novel that brought him the most fame, The Jungle, provided a fictionalized account of the horrific conditions at Chicago’s “Packingtown,” the center of the U.S. meatpacking industry at the turn of the 20th century. It was Sinclair’s sensational story that stoked public outrage and drove President Theodore Roosevelt to push through the Meat Inspection Act and Pure Food and Drug Act in 1906. These two laws are the basis for today’s regulation of the food industry by the FDA and USDA.

By the early 1900s, politically progressive leaders had begun to publish attacks on meat-packing establishments for their unsafe working conditions and unjust employment practices. Their primary target was the Union Stock Yards section of Chicago, a massive complex of feedlots, slaughterhouses, meat-processing plants, and employee housing. In 1904, the plight of the workers made national headlines when the meat-packer's union in Chicago went on strike, demanding better wages and safety measures. 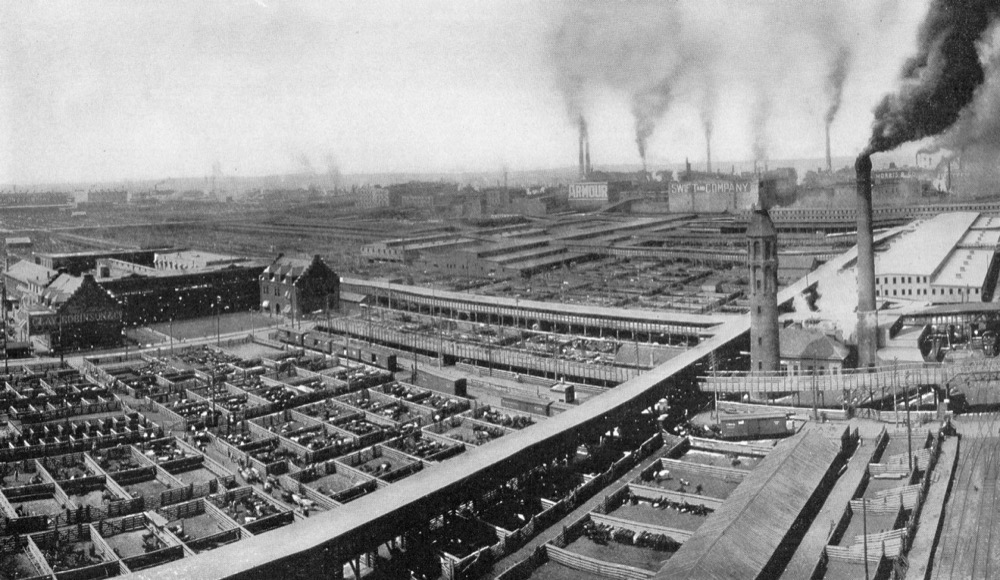 Sinclair sympathized with the workers. He had already established a name for himself as a “muckraker” – a nickname for a journalist who exposes corruption in government and business by focusing on its effects on the lower classes of society. Knowing his reputation, the editor of a progressive journal, Appeal to Reason, suggested that Sinclair investigate the strike and publish his findings. Agreeing to the assignment, at age 26, Sinclair went undercover into Packingtown in 1905. On the inside, he personally observed the appalling conditions at the meat-packing plants and interviewed the employees, their families, lawyers, doctors, and social workers.

A photo of Upton Sinclair in 1906. Source: https://www.biography.com/writer/upton-sinclair

To earn the sympathy of the public, Sinclair decided to write a novel about his experience, as he felt that fiction would have a more powerful effect on readers. The result was The Jungle, published in 1906 by Doubleday, after being rejected by five other publishers as too shocking. Sinclair included a chapter on how contaminated meat products were processed, doctored by chemicals, and mislabeled for sale to the public. For example, here’s a particularly graphic excerpt:

There would be meat that had tumbled out on the floor, in the dirt and sawdust, where the workers had tramped and spit uncounted billions of consumption germs. There would be meat stored in great piles in rooms; and the water from leaky roofs would drip over it, and thousands of rats would race about on it. It was too dark in these storage places to see well, but a man could run his hand over these piles of meat and sweep off handfuls of the dried dung of rats. These rats were nuisances, and the packers would put poisoned bread out for them; they would die, and then rats, bread, and meat would go into the hoppers together. This is no fairy story and no joke. 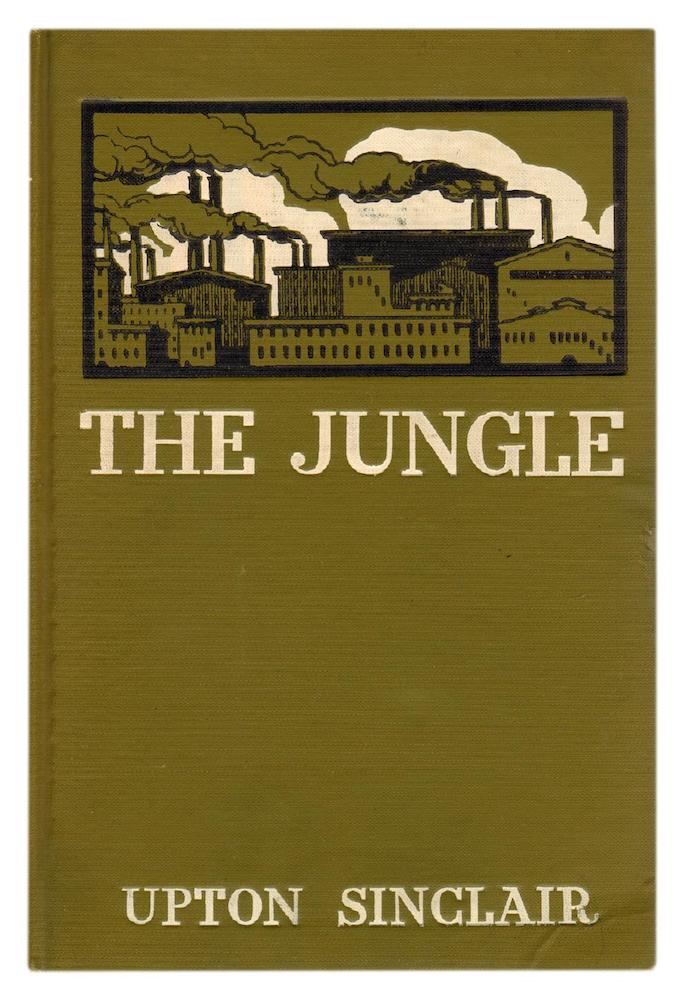 Cover of the first edition of The Jungle. Source: https://www.history.com/news/7-things-you-may-not-know-about-the-jungle

It was this chapter more than any others that outraged the reading public. Though intended to create sympathy for the exploited and poorly treated immigrant workers, the novel instead aroused widespread public indignation at the impurities in processed meats. Later Sinclair would write that he "aimed at the public's heart, and by accident [he] hit it in the stomach."

Sales of the book skyrocketed. Within weeks it was translated into 17 languages, becoming one of the first international bestsellers. Attracting attention around the world, prominent figures such as Winston Churchill praised Sinclair for making the “great Beef Trust stink in the nostrils of the world.” The White House was bombarded with mail calling for reform of the meat-packing industry. As domestic and foreign purchases of American meat fell by half, a potential economic crisis loomed.

An astute observer of public opinion, President Teddy Roosevelt understood how the issue of food safety and sanitation could no longer be ignored. He knew that when Americans learned of the full scope of the problem, any politician who did not support reform would most likely lose reelection. He also recognized that Sinclair’s revelations had devastated public faith in meatpacking, and that further muckraking revelations would soon be hitting the front pages of newspapers across the country. But ingeniously, rather than confront industry leaders head on, Roosevelt decided to apply behind-the-scenes pressure to coerce the meat packing industry into compliance.

With a compelling sense of urgency, Roosevelt wasted no time in directing the U.S. Department of Agriculture to scrutinize Sinclair’s allegations, assigning Labor Commissioner Charles P. Neill and social worker James Bronson Reynolds to visit Chicago’s meatpacking plants and conduct a thorough investigation. After an exhaustive probe, Neill and Reynolds not only confirmed Sinclair’s claims, they suggested that The Jungle had actually understated the severity of the problem.

When Roosevelt received and read the full text of the Neill-Reynolds report, he was disgusted. Neill and Reynolds found that meat was being “shoveled from filthy wooden floors, piled on tables rarely washed, pushed from room to room in rotten box carts, in all of which processes it was in the way of gathering dirt, splinters, floor filth, and the expectorations of tuberculous and other diseased workers.” They also observed laborers urinating near the meat and expired meat being re-labeled as new.

The commissioners testified before Congress that they had reported only "such things as showed the necessity for legislation." They criticized existing meat-inspection laws that required only confirming the health of livestock only prior to slaughter and recommended that inspections take place at every stage of meat processing. They also called for the secretary of agriculture to make rules requiring the "cleanliness and wholesomeness of animal products." 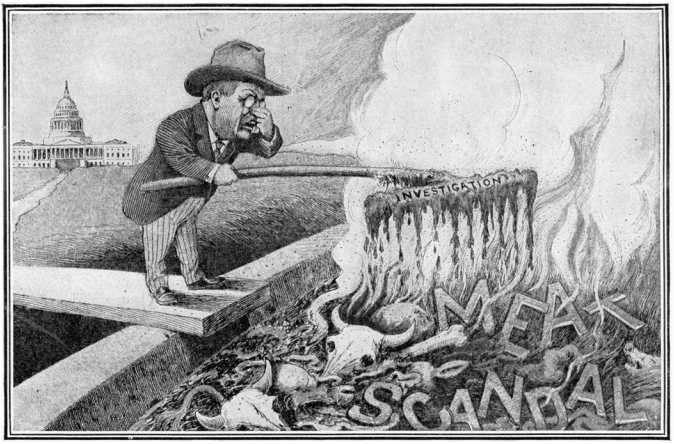 Roosevelt called the conditions revealed in the special commission's report "revolting." In a letter to Congress, he declared, "a law is needed which will enable the inspectors of the Government to inspect and supervise from the hoof to the can the preparation of the meat food product."

Roosevelt overcame meat-packer opposition and pushed through the Meat Inspection Act of 1906. This groundbreaking law authorized inspectors from the USDA to prevent any contaminated or mislabeled meat from entering interstate and foreign commerce. It not only benefited the meatpacking industry and the consuming public, but greatly expanded federal government regulation of private enterprise. In fact, on the same day he signed the Meat Inspection Act, June 30, 1906, Roosevelt also signed the Pure Food and Drug Act, which established the FDA and set the foundation for all food safety regulations today.

Like Uncle Tom’s Cabin, which Abraham Lincoln cited as igniting the movement to abolish slavery, Upton Sinclair’s The Jungle showed how the power of realistic fiction can inspire the nation to take action. And like any good classic, it is still read today for its sensitive and powerful portrayal of the working class.

Topics: Food Safety
What is the Difference Between Logistics and Supply Chain Management? Digital Twins: Coming of Age for the Supply Chain
Other Suggested Posts
New OSHA Heat Standards Require Indoor Temperature and Humidity Monitoring
While the nation transitions into months of cooler weather we only need to look back to the previous summer to acknowledge that our world continues to get much ...
Read More
The Post-Pandemic Market: Digital Transformation at the Tipping Point
The COVID-19 crisis has radically altered the largest global retail category, food and beverage, and the post-pandemic market may very well prove to be the ...
Read More
The Post-Pandemic Market: A Commitment to Sustainability
This post is the second in our series about how grocers are dealing with the legacy of COVID-19 in a post-pandemic market. In this post, we look at the issue ...
Read More
The Post-Pandemic Market: How Retail Grocery is Adapting
This post is the first in a series of three that look at how the grocery sector is dealing with the legacy of COVID-19 in a post-pandemic market. In this first ...
Read More
Post-COVID-19 Food Safety Will Introduce a 'New Era' of Digital Tools
In a previous post, we discussed the importance of each stage of the supply chain doing its part in minimizing food safety risk. The federal government created ...
Read More