A Look Inside the Multi-Format Convenience Store

There’s a new convenience store in town. It doesn’t merely stock the old standbys, such as soda, energy drinks, snacks, and candy. No, this “multi-format” c-store is a hybrid that also offers fine wine and artisan beer, gourmet coffee, hot prepared foods, sandwich and salad bars, and upscale vending machines – even gas pumps in the parking lot. Not to mention that customers may also order online in advance or request delivery.

Typically an urban phenomenon, these new-fangled stores appeal to real estate developers eager to fill spaces that see steady foot traffic by an 18-34 demographic accustomed to quick-trip shopping. In some cases, these “experiments” are startup companies, and in others, large national chains looking to supplement their traditional big box supermarkets with smaller, niche “city marts.” In this post, we’ll take a closer look at some of these companies that have been recently making the news.

Located in Denver's Central Business District, Choice Market opened the doors of its first store in 2017. CEO Mike Fogarty has made omni-retailing the core of its business model: the enterprise is a convenience store, grocer, and fast-casual restaurant all-in-one. 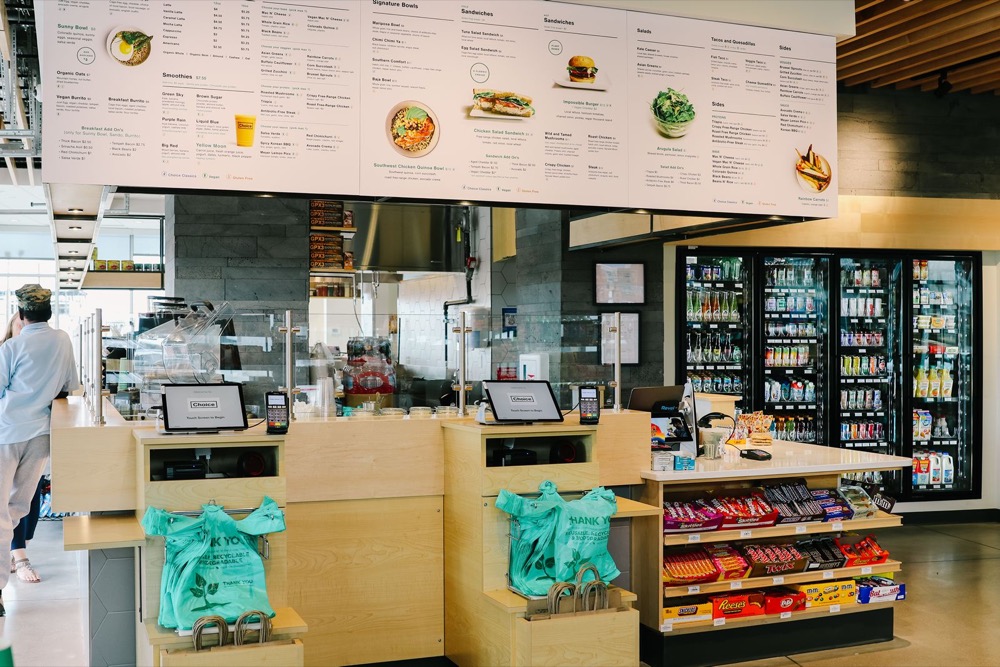 Choice Market does 60% of its business in made-to-order and ready-to-eat packaged meals prepared in an on-site kitchen, available for pickup or delivery by Uber Eats and Postmates. With 30% of the store's sales ordered online, the store is an e-commerce driver that’s also investing in vending machines and checkout-free technology.

Choice Market inventories about 3,000 SKUs from around 100 local suppliers ranging from trade goods (e.g., paper towels) to gourmet specialties (e.g., acai bowls). All of its produce is organic, but it also stocks name brands in categories like candy and beverages.

Choice Market's meal service includes wraps, bowls, salads, and smoothies attracting regular lunch and breakfast crowds. "We think the scratch kitchen is where the value really lies," Fogarty said in an interview. "Local, fresh ingredients have always been core to our business.”

Choice Market recently overhauled its menu in partnership with Erik Oberholtzer, founder of the California restaurant chain Tender Greens. According to Fogarty, the new options use more locally sourced ingredients to create dishes like a harvest salad and tri-color quinoa bowl.

Before founding Choice Market, Fogarty managed plastic packaging for WhiteWave Foods, where he observed the development of innovative products passed over by major chains. Legacy operators weren't forward-thinking, so he decided to go into business for himself. 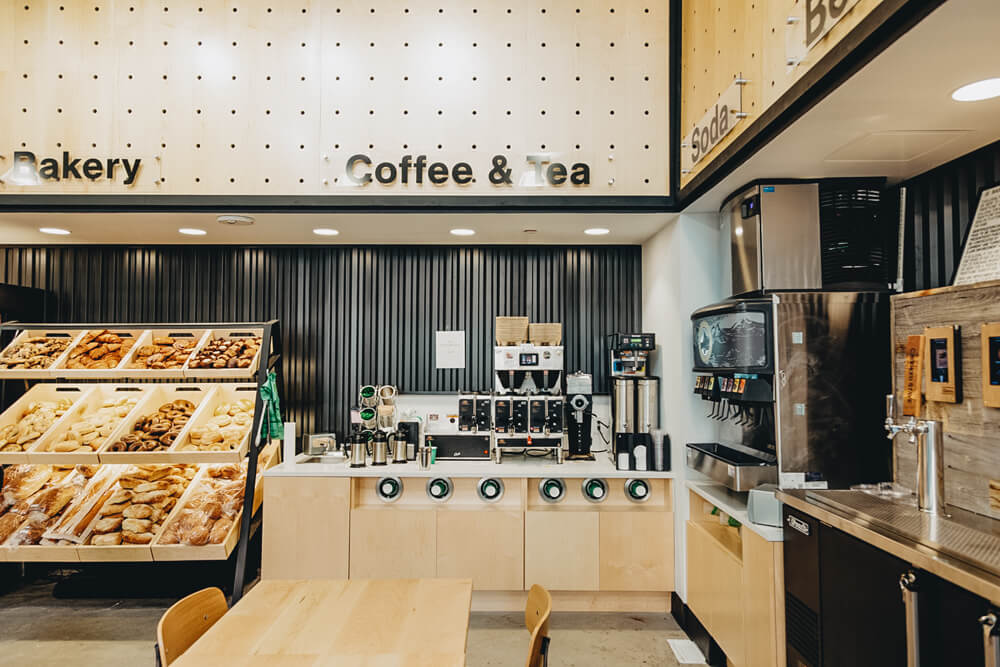 Fogarty grew up near Philadelphia and cites Wawa as a major influence on his store's model. He also was impressed by the small markets he frequented in Barcelona. But beyond urban locations, Fogarty also wants to reach shoppers in the suburbs with two new c-store formats.

The first format is a high-tech vending machine called the Choice Mini-Mart. Using either a credit card or mobile app, customers open the vending door to choose from a selection of beverages, packaged snacks, and fresh meals ranging from $3 to $11. A sensor system tracks the items and charges customers once the purchase is complete. Fogarty envisions Mini-Marts appearing in office buildings, airports and other convenient neighborhood shopping locations.

By the end of this year, Fogarty plans to open a new format in the Denver suburbs that will feature gas pumps, as well as electric-vehicle charging, scooter, and bike share stations under a solar canopy. It will also feature self-checkout similar to Amazon Go. According to Fogarty, "You can charge your Tesla, do some light grocery shopping, hang out on Wi-Fi and grab a six pack of beer.” 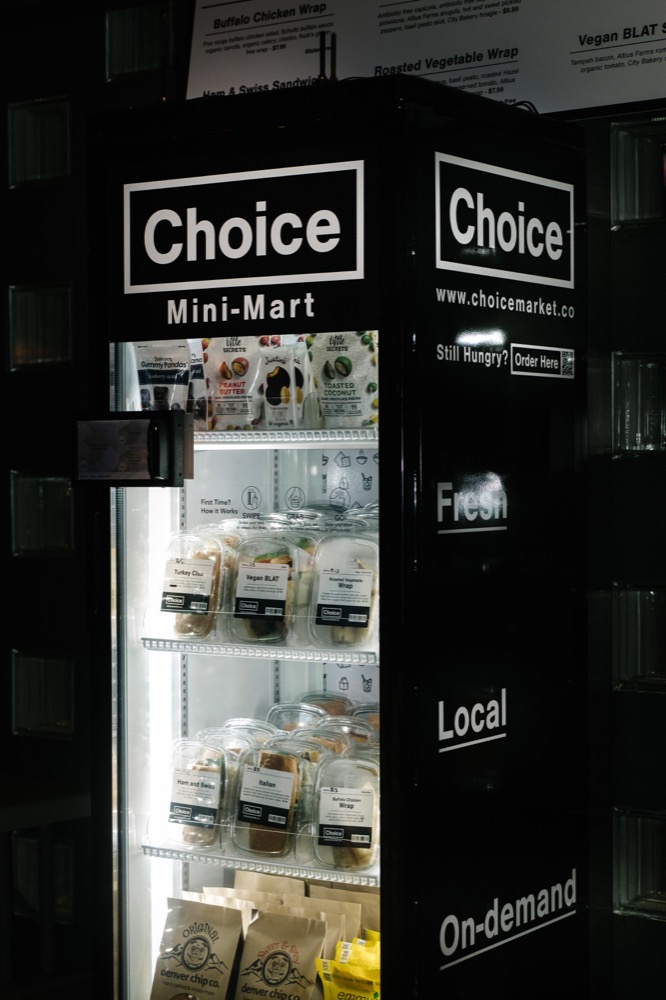 Within five years, Fogarty hopes to build 30 stores in several metro markets. If all goes according to plan, the company may explore a sale or an IPO.

Green Zebra Grocery originated out of Portland, Oregon. The chain’s three stores, which at 5,000 square feet are twice the size of the average c-store, stock about 6,000 SKUs, including conventional items, fresh produce, and pet food.

Like Choice Market, what distinguishes this multi-format retailer is its inventory of upscale items, such as roasted coffee, wine and beer (including raspberry mead), kombucha slushies, and a curated selection of local specialty goods. The all-organic salad bar is a top seller, as are a variety of meals prepared in house.

"We’re a cross between a Whole Foods and a 7-Eleven and we’re redefining what it means to be a convenience store in America by offering healthy food," CEO Lisa Sedlar said in an interview. “Customers spend an average of $10 per trip, and many come back the next day.”

Sedlar founded Green Zebra in 2013 after serving as CEO of New Seasons Market. Her stores earned a combined $12 million in revenue in 2018. Given these positive results, Sedlar has big plans to expand Green Zebra along the West Coast, with 24 locations operating by 2023. Her even bigger picture is a chain of 200 Green Zebras plus 200 "micro Zebra” locations slated to open inside office buildings and other establishments with high foot traffic. The micro Zebra will offer pre-made salads, sandwiches, beverages, nutrition bars and self-checkout kiosks.

Sedlar’s task will be to find locations where Green Zebra’s typical customer base is likely to live, work, and shop. With small retail spaces more plentiful in urban markets than the suburban big box spaces, she’ll have many more options.

Initially, LaVitola tried partnering with existing retailers, but discovered they lacked the mix of products that appealed to Foxtrot's customers. So, it made better business sense to stock its own products. Says LaVitola, “from a financial perspective, wholesale is better than retail." 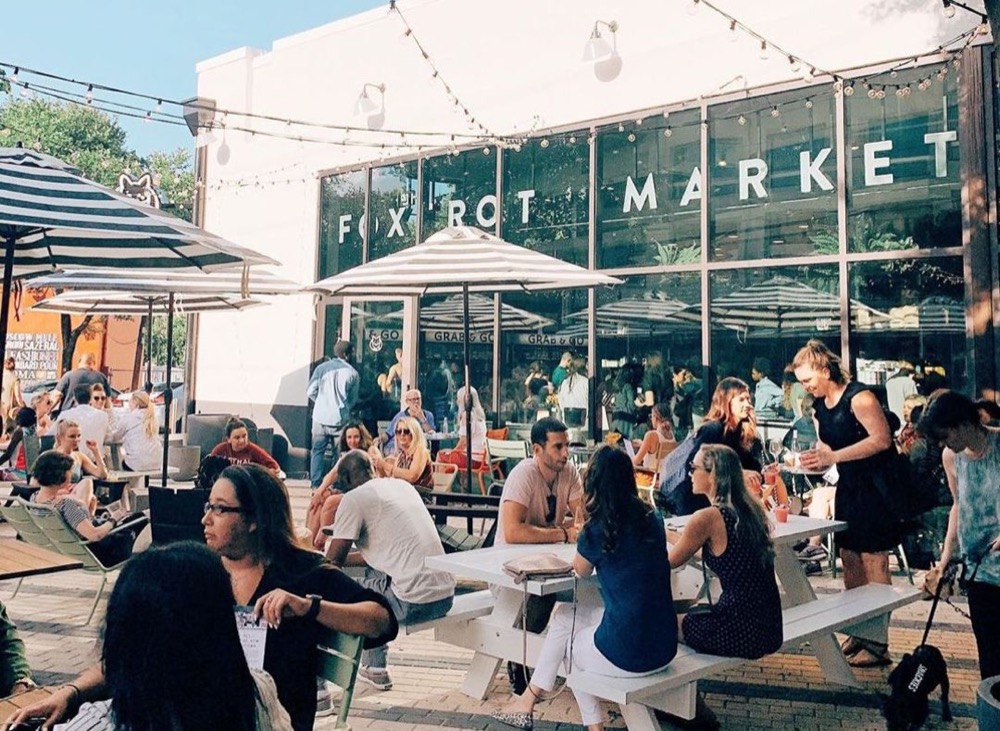 Delivery is central to Foxtrot’s operations – in accordance with current customer trends. According to Bloomberg, for example, the number of food delivery app downloads is up 380% compared with just a few years ago. Meanwhile, research suggests that restaurant delivery sales in the U.S. will increase an average of 12% a year over the next several years.

LaVitola believes one major reason for his company’s success is that Foxtrot wants customers to make the market their personal center of operations – a neighborhood third space where they can order a meal, chat with friends, find a comfortable chair, or settle in to work on their laptops. LaVitola partnered with Karen Herold from Studio K to design its stores. She gave them a "cozy neighborhood coffee shop vibe," he says, rather than just aisles of inventory.

LaVitola was enrolled at the University of Chicago's Booth School of Business when he developed his idea for a delivery app for beer and wine. His friend Taylor Bloom, a computing whiz, built the software. Together, they launched the app in 2013 with $50,000 raised from friends and family.

Because of a city law requiring alcohol to be sold from a retail location and not a warehouse, they soon decided to build a brick-and-mortar location. Thus, the first Foxtrot store opened in 2015. Currently, the chain has five thriving units.

Hy-Vee Fast & Fresh is just one of the multi-format c-stores that major chain Hy-Vee is opening in recent years. At about 10,000 square feet, the location in Des Moines offers the typical chips and candy bars along with produce, freshly prepared meals, a selection of upscale offerings, plus wine, spirits and a walk-in beer cave with a dozen local craft beers on tap. Shoppers can pick up online grocery orders in lockers outside. 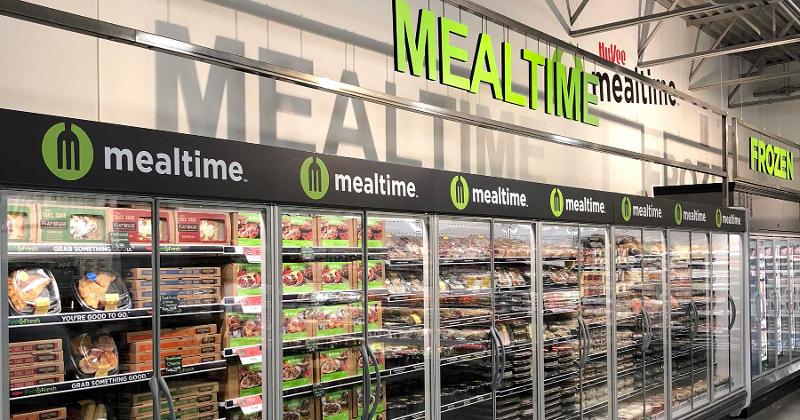 Hy-Vee management credits aggressive promotions for much of the store’s success, including a “buy one, get one” pizza coupon sent to everyone within a three-mile radius and a “half-off” deal for people who have season passes to a nearby amusement park.

Fast and Fresh isn’t the only multi-format concept Hy-Vee is testing. A few miles from Fast & Fresh, a HealthMarket sells all-natural specialty items like kombucha, cauliflower pizza crust, and probiotics. In downtown Des Moines, Fourth + Court, which opened in 2017, caters to young shoppers and empty nesters alike, many of whom live in the three-story apartment building above the store.

Are these multi-formats real trends or merely trendy? Hard to say for sure in these fickle times. But even behemoth Walmart is getting in on the action and testing “niche markets” to supplement their huge box superstores. That alone suggests smaller, upscale hybrids are probably here to stay.

Topics: Food Safety
The Many Faces of Geofencing Supermarkets Moving Toward Zero Food Waste
Other Suggested Posts
New OSHA Heat Standards Require Indoor Temperature and Humidity Monitoring
While the nation transitions into months of cooler weather we only need to look back to the previous summer to acknowledge that our world continues to get much ...
Read More
The Post-Pandemic Market: Digital Transformation at the Tipping Point
The COVID-19 crisis has radically altered the largest global retail category, food and beverage, and the post-pandemic market may very well prove to be the ...
Read More
The Post-Pandemic Market: A Commitment to Sustainability
This post is the second in our series about how grocers are dealing with the legacy of COVID-19 in a post-pandemic market. In this post, we look at the issue ...
Read More
The Post-Pandemic Market: How Retail Grocery is Adapting
This post is the first in a series of three that look at how the grocery sector is dealing with the legacy of COVID-19 in a post-pandemic market. In this first ...
Read More
Post-COVID-19 Food Safety Will Introduce a 'New Era' of Digital Tools
In a previous post, we discussed the importance of each stage of the supply chain doing its part in minimizing food safety risk. The federal government created ...
Read More