The Grocery Sector Steps Up to Sustainability

Responding to media coverage of the incident, an Amazon spokesperson explained that the company’s strategy is to compost food unfit for donation and recycle the packaging. Deflecting any responsibility for the disposal, Amazon implicitly blamed local nonprofits instead:

“Amazon Go’s policy is to donate unsold food that is still in good condition… In certain circumstances, our community partners may also be discarding food, but we can’t comment on the details of their practices.”

After Gregg reported his discovery, Seattle Public Utilities began an investigation of Amazon, and removed the food products from the landfill. If found responsible, Amazon will most likely pay some sort of penalty, since Seattle banned food waste in garbage in 2015. The citywide ordinance states that all commercial establishments must “subscribe to a composting service, process their food waste onsite, or self-haul their food waste for processing.”

Of course, Amazon GO is not the only grocery store creating food waste. However, breaking the law is another matter, and raises the issue about the sustainability of plastic wrapping and packaging for convenience. True, plastic makes it easier for consumers to buy individual meals and snacks quickly, and at the same time it ensures that food products remain fresh. But this “grab-and-go” model often lacks a process for adequately dealing with unsold products that are discarded. It’s a double setback: not only is the food wasted, but the single-use packaging gets dumped in a landfill.

“Single-use packaging provides a momentary convenience, but can remain a problem for decades or more. Petroleum-based plastic takes up space in landfills for over a lifetime, and eventually breaks down into smaller pieces of microplastics that pollute waterways.”

Because of its size and dominance in the U.S. economy, Amazon could be a leader in addressing sustainability questions and act as a model for smaller operations to emulate. Convenience stores experienced record in-store sales in 2018, and Amazon may be opening up to 3,000 new Go stores by 2021. The sector is ripe for change.

The retail food sector generates 8 million tons of food waste a year. Beyond that, the Environmental Protection Agency estimates that containers and packaging make up 23% of landfill. Tons of plastic finds its way into the ocean every year, killing sea life and creating monstrous islands of trash. Plastic fibers are now even contaminating our tap water.

Since China stopped accepting waste shipments in 2018 after years of taking in 50% of the world’s recyclable goods, many U.S. businesses have lost a major outlet for recycling their packaging. And with estimated costs of $18 billion a year to reduce waste, grocery stores are under a lot of pressure. Not to mention the rise of movements to ban plastic bags, straws, and utensils sweeping cities and towns across the country.

As a result of all these developments, grocers are being forced to reevaluate packaging choices. Some entrepreneurs envision a radical solution: eliminating waste altogether by creating “zero-waste” grocery stores. Often this means selling food in bulk only and requiring customers to bring in their own containers and bags.

One example is The Filling Station in New York, dedicated to selling a minimum of items to remain scalable (in this case olive oil, vinegar, salt and beer). While this refill model might work for specialty stores, zero-waste is more difficult to superimpose on a supermarket. 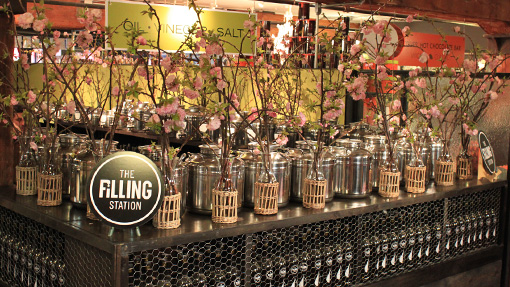 That hasn’t stopped a lot of market leaders from taking the first steps toward zero-waste. Here are a few national chains making headlines with their own sustainability initiatives.

Last September, Kroger, the largest supermarket chain in the United States, announced a decision to eliminate all food waste in its stores by 2025. According to Jessica Adelman, Kroger’s group vice president of corporate affairs, the company spent the past year conducting a comprehensive waste analysis to better devise a plan that includes the following action items:

Albertsons has also unveiled strategies to reduce plastic waste by 2025:

Fully committed to a zero-waste benchmark, Wegmans plans to reduce in-store plastic packaging made from fossil fuels and single-use plastics by 2 million pounds by the end of this year, with a goal of 10-million-pounds by 2024. The company believes replacing plastic packaging with materials made from plant-based renewable fibers will be the first step toward achieving their goal.

The Challenges of Zero Packaging Waste

Despite these pioneering efforts, zero-waste stores are unlikely to replace traditional supermarkets anytime soon. Packaging is fundamental to the 21st century trend toward increasing convenience, which continues to accelerate by leaps and bounds. Lack of packaging also means no shelf-stable food products, which requires more time, money, and energy spent on moving inventory quickly before food spoils – yet another environmental problem. For suppliers who ship food in bags and boxes, no feasible alternative exists to transport foods in bulk without enormous expense. Smaller scale solutions seem more likely in the short term, such as dedicated plastic-free aisles, compostable bioplastics, and online zero-waste shopping platforms.

For example, a new zero-waste shopping platform called Loop has partnered with companies such as Proctor & Gamble, Nestle, and Coca-Cola to offer brand-name goods in reusable containers. For example, products like Crest or Häagen-Dazs are home-delivered in a reusable box; when the consumer is finished using them, Loop picks up the empty containers, and washes and refills them for reuse.

Reducing or eliminating food and packaging waste are not the only methods for a grocery chain to achieve greater sustainability. One new initiative by the Environmental Investigation Agency (EIA) identifies retailers taking significant steps to reduce potent greenhouse gases in their cooling systems. This past Earth Day, EIA announced that Aldi, Whole Foods Market, Target, Sprouts Farmers Market, and Ahold Delhaize USA are currently cutting back hydrofluorocarbons (HFCs) and fostering energy efficiency in refrigeration. These grocers are profiled at ClimateFriendlySupermarkets.org, a website providing a map of supermarket locations nationwide using climate-friendly cooling.

Even Small Steps Can Make a Difference

Perhaps your grocery chain is not yet in a position to make such significant changes in infrastructure. That shouldn’t deter you from adopting simpler, less expensive sustainable measures at various points in your operations.

Follow these tips from Energy Star to maintain comfortable temperatures within your stores while saving energy at the time:

Being more energy-efficient isn’t just great for the environment, it can also help you save money. According to the Small Business Administration, the savings are significant for supermarkets, in which a 10% reduction in energy can boost net profit margins by as much as 16%.

Be sure to use Energy Star certified lighting, which typically uses one-quarter the energy of traditional lighting and distributes light more efficiently and evenly than standard fixtures. Also install automatic lighting controls or sensors that can help you conserve energy when lights aren’t in use.

Reusable bags are becoming more common in retail stores. For this reason, more and more communities, cities, and states are opting for reusable bags at stores, sometimes enforced by legislation. Even if your store isn’t affected by government regulations, encouraging reusable bags shows that your grocery chain cares about sustainability.

You might consider charging customers for using disposable bags, or perhaps nudge them with incentives, such as offering a special discount when they use them. Even better, start selling tote bags and post signage to encourage customers to bring them on their next shopping trip.

Once you establish and implement new sustainable practices, publicize your initiative. Discuss it in a corporate blog. Post it to Facebook, Twitter, Instagram and other social media channels you may use. Feature it on the landing page of your e-commerce website. With so many outlets to choose from, you can generate positive PR through demonstrating your commitment to corporate social responsibility.

Topics: Food Safety
Building, Planning, and Implementing an Efficient Cold Chain Heroes of Pharmacy Safety: Friedrich Serturner Discovers Morphine
Other Suggested Posts
Carefully Moving the Cold Chain: Best Practices With Managing Refrigerated Cargo
Refrigerated and temperature-controlled cargo is becoming more popular as more commodities require specific climate conditions for transport. More and more ...
Read More
Monitoring Perishables and Medications During a Power Outage
California has experienced unusual weather throughout its 169 year history, but more recently the most populous U.S. state has seen widespread droughts and ...
Read More
Field to Market: Grape Logistics
Delano, California is grape country. The northern California town is located about 30 miles from Bakersfield, and is the home of grape growers. It's also the ...
Read More
Monitoring the Temperature of Complex Systems… and Sandwiches
In a simple cooler or freezer, a single sensor will suffice. Air comes off the cooling unit, is pushed through an in-take vent into the body of the ...
Read More
How Industry and Congress Plan to Fix Food Expiration Labels
In our previous post about expiration labels, we surveyed the history of open dating, its lack of standardization, and the subsequent consumer confusion about ...
Read More